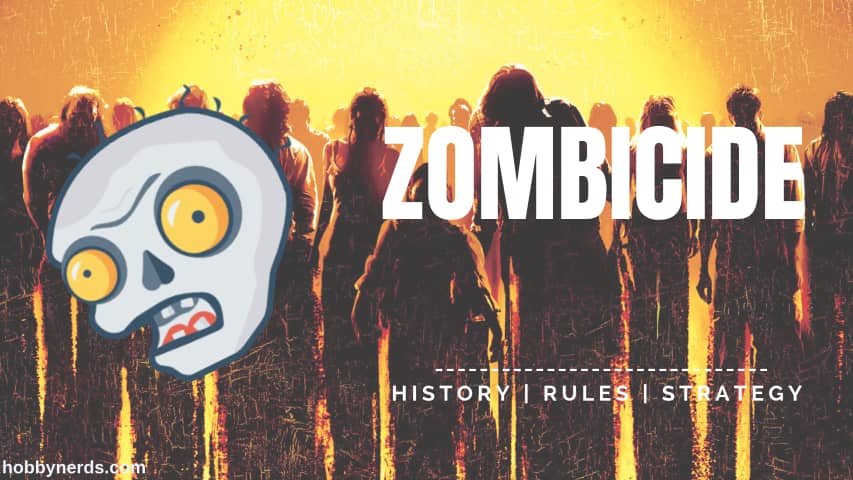 Zombicide is a game that emphasizes the collaboration between players who assume the role of a survivor.

In the game, they are positioned to square off against a horde of zombies, each using their unique skills and strategic planning to overcome their assault.

The zombies, as fearsome and deadly as they may be, have one weakness – predictability. Can you utilize your resources to the maximum and show them who’s in charge?

The History Of Zombicide

Zombicide was created by Guillotine Games in 2012. In a Kickstarter campaign, the creators managed to raise $781,597 in funding, as suggested by Wikipedia (Source).

In 2015, a sequel was released, titled Zombicide: Black Plague, in which the players are tasked with controlling a group of survivors who are battling an unknown illness that seems to have spread across the land.

The Rules And How To Play

Cooperating with other players is what’s going to help you prevail against the onslaught of zombies and is the only reliable winning strategy. As for the rules, they can be quickly summarized by these points:

The full Season 1 rulebook can be downloaded from this link. Or just read it below:

Zombicide Expansions In About 5 Minutes

(Note: some of these are standalone expansions and some are spin-off games, and each has its own scenarios and comes with a new set of figures.)

Featuring 6 survivors, with each having a different personality, the objective of the game is to turn the prison into a shelter and, of course, defeat the zombies.

This time, however, the zombies have taken their game up a notch; they’ve gone berserk, which grants them an immunity to ranged attacks.

The expansion introduces several new elements, including security zones, observation towers, and doors that can be opened from afar, which unlocks several new strategies.

Since it’s completely independent of the previous release, everything you need comes straight out of the box.

The expansion introduces 10 new missions and Zombivors, a special kind of survivors the players can control.

There’s also a new type of enemy: toxic zombies. As you’ve probably guessed, these are the type of zombies that can infect player-controlled survivors, turning them into Zombivors.

In this expansion, the survivors have to face another enemy besides the zombies: other players!

The zombies now lurk in the streets, which requires even more strategic thinking and team collaboration to deal with. Since the players now also have to compete against each other, the collaborative aspect of the game is pushed to the background a bit and the emphasis lies on the competition.

Apart from 4 new survivors and fifteen new missions, you also get 8 sidekicks to accompany you on your quest.

There are also new weapon cards for the survivors, unlocking additional offensive options in their fight against the zombie hordes.

These, coupled with new advanced type of zombies, allow for an even better experience for the players who now have to think even more strategically to prevail in the fight.

This is a major expansion which is not compatible with the previous ones (Source).

Facing the game-controlled zombies, the players gain experience and acquire new weapons to fight them, and the more experienced they are, the more zombies come crashing the party.

Even though the game retains its core mechanics, this particular version introduces several new changes, such as a new breed of survivors, fantasy races, unique powers, etc.

Designed to be compatible with the Black Plague, this expansion introduces a new type of enemy: zombie wolves. Their special power is the ability to progress very quickly on the board.

Additionally, the pack leader makes the survivors’ fight even more demanding with its special abilities, which can easily tip the scale in favor of the zombies if you’re not paying attention.

There’s a new type of enemy in the house: zombie orcs! Can you adapt and overcome the challenge?

This expansion introduces more than a single novelty: weapons, familiars, survivors, Tainted Walkers, and an Abomination.

Zombicide: No Rest for the Wicked

Enjoy a whole new set of weapons (including the Ballista) to help you fight off the enemy hordes.

This expansion introduces quite a unique setting and takes the players beyond the confines of planet Earth and into space.

In this futuristic environment, the zombie virus has infected the aliens.

If you’d simply prefer to play the original game without any of the expansions that came afterward, you can get it from Amazon or one of the other retailers.

This is one of the most basic versions of Zombicide, and the playtime of an average game usually lasts around 20 minutes on the beginner board and up to 3 hours on the expert board.

Also referred to as “scenarios”. There are downloadable missions you can get from the official website (completely free of charge).

They feature a map, objectives, and a list of special rules that apply to the mission. To help you make your initial decision, there are 3 main factors to judge them by: difficulty, number of survivors, and playtime.

If you’d rather play the game on the computer, there’s a solution for that, and it’s called Tabletop Simulator – Zombicide. It was released in 2016 on Steam, and at the time of writing, the reviews are mostly positive.

These are the playable characters in the game, some of which include:

The entire cast is available here: