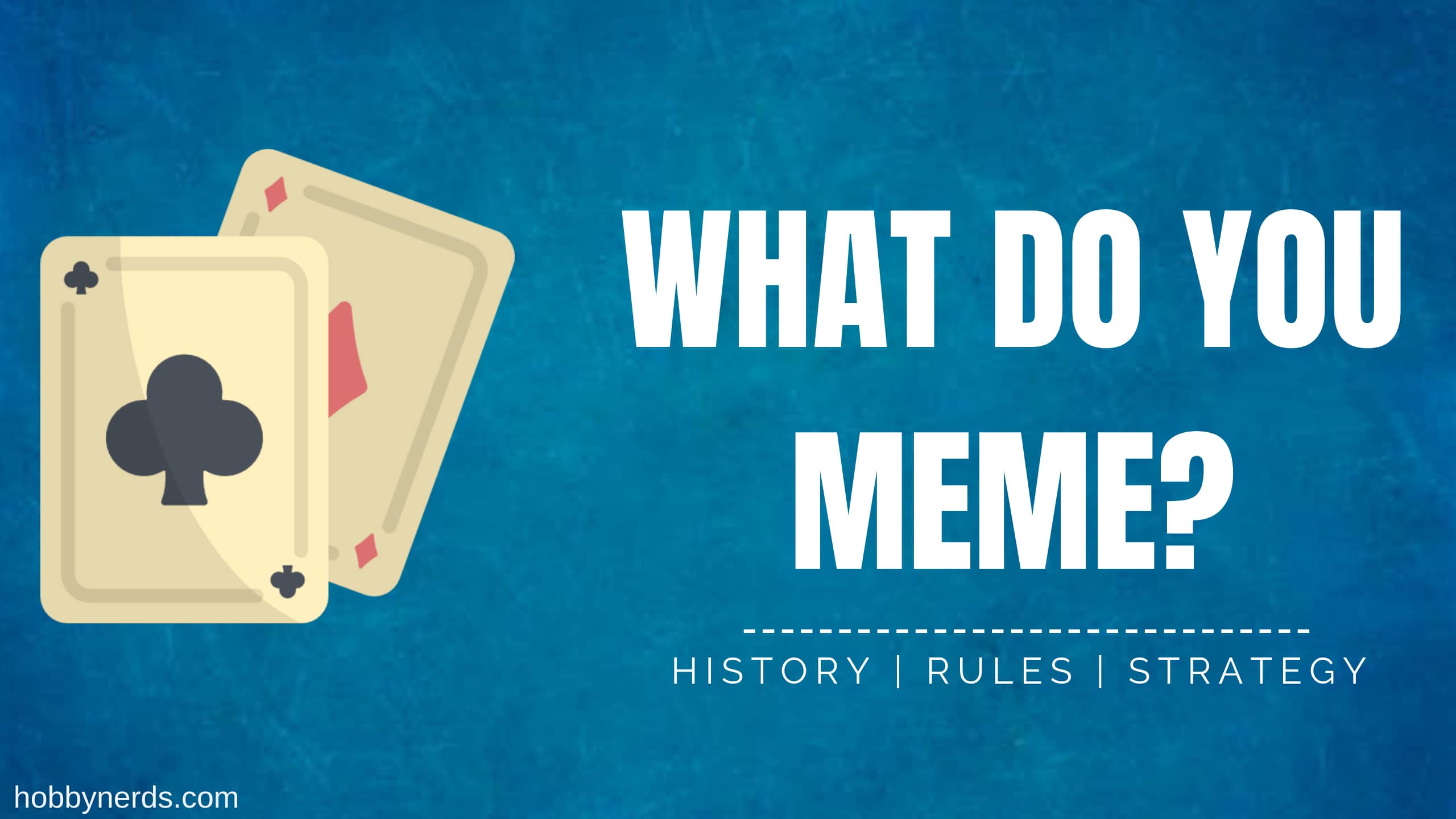 An adult party game for the meme-lovers, What Do You Meme is the new sensation in the landscape of card games.

What Do You Meme, which features cards similar to the “Cards Against Humanity” game, has the objective of pairing captions to pictures of prominent memes, thus basically creating an image macro. Aimed at the social media generation, players of the game compete to develop the funniest meme by pairing hilarious caption cards with the photo card.

Winners are selected by a judge, which changes each round. It is a perfect game for party planners who look for something exciting and entertaining on a fair budget.

Developed by Elliot Tebele, Elie Ballas and Ben Kaplan, the team behind the social media sensation FuckJerry, which has taken Instagram by storm, What Do You Meme is meant for a larger group of people, who wish to laugh their way into a stupor.

The team triggered a Kickstarter campaign to fund their project and achieved the goal of $10,000 within four hours on June 14th, 2016.

After two days, a YouTube video explaining the game was uploaded by FuckJerry and received over 43,000 views. On June 17th, 2016, What Do You Meme was reviewed on “Game Bang” of Smosh Games and the video of the team playing the game achieved over 1.1 million views in a year and a half.

What Do You Meme game appeared at number one on “Best Sellers in Toys and Games” list of Amazon.

BUY THE WHAT DO YOU MEME GAME

Two different types of cards are used in the game – caption cards and meme cards.

Both the captions and memes are taken from the Instagram feed of FuckJerry. In What Do You Meme, every participant starts with seven caption cards.

Video Guide: How To Play

Then, other people playing the game need to select a caption card from their own hands to pair with that meme.

The player (the judge) who actually laid down the meme card selects his/her favorite caption from all the available options. A point is given to the player who laid the selected caption, and he/she is declared winner of the round.

Typically, the player, who has created the perfect meme for a couple of times is declared the winner.

Though the rules of this inventive and creative game are insanely simple, here are the things that need to be mentioned.

The Smosh Games YouTube channel does a funny playthrough- check out their gameplay and strategies. Plus they add a funny punishment to up the stakes!

What Do You Meme Expansions

What Do You Meme offers four exciting expansion packs. With the “Game Of Thrones Pack”, you get to meme your favorite characters from “Game of Thrones” like Jon Snow, Cersei etc.

The expansion comes with 75 photo cards to be added to the core game. “Basic Bitch Expansion Pack” offers captions and photos that personify the “Basic Bitch” culture.

If you personify yourself with the “Stoner” culture and are looking for photos and captions to promote it, “Stoner Expansion Pack” should be your best bet. You get 15 photo cards and 50 caption cards in the pack. You can visit What Do You Meme website to buy these expansions at great prices.

What Do You Meme App

Developed by InVogue Apps & Games, the What Do You Meme app lets you play the classic game with dank memes and funny memes. You can play it alone or with friends.

You can download and install the app on devices that support Android 1.6 and above. The website of the developer can be visited to know more about the specifications of this app.

What Do You Meme Freestyle Cards

The game strives to extend its playability by including freestyle cards that let players come up with their own caption for a picture card. Things can often get harsh in such situations as players may get roasted, feelings may get hurt, but one thing would remain unchanged – pure fun.

What Do You Meme Kickstarter

Memes make the World Wide Web go round and communicate what people are thinking. Perhaps this explains why What Do You Meme game has been a best-selling product on Amazon. 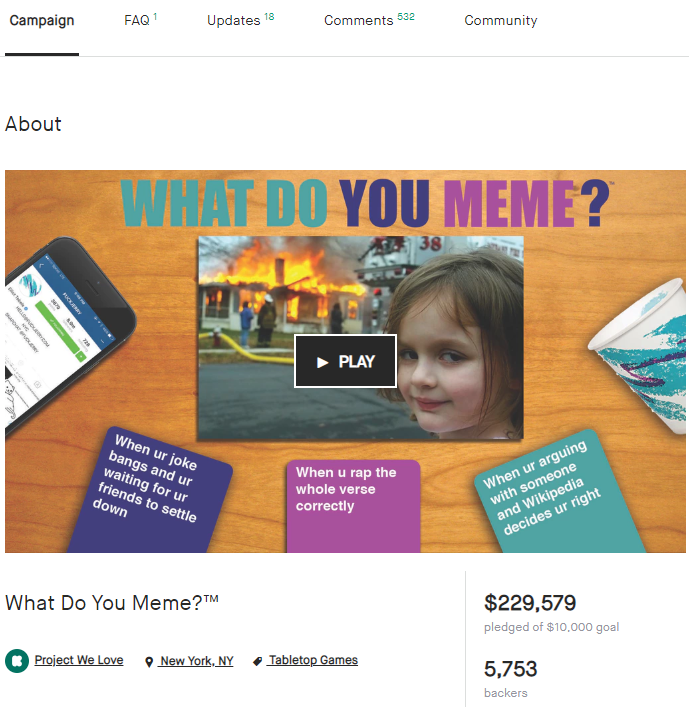 The simple game that was started as a Kickstarter campaign created by the brand FuckJerry, has become the best-seller on the largest e-commerce site of the world.

What Do You Meme Versus Cards Against Humanity

Cards Against Humanity is a hilarious card game that revolves around a rotational selection on who comes up with the maximum hilarious match for cards.

The game is very similar to Apples to Apples or Cards Against Humanity, but first before we get started, you need to know what a meme is.

A meme is a humorous image, video piece of text, etc that is copied and spread rapidly by Internet users. To play you have to first purchase the game.

You can find the game at Amazon, Walmart, Target or other select stores. You need at least three players, but you can play with up to 20.

We recommend playing in a large group because it’s more fun that way – and the last thing you need is a good sense of humor.

When you open the box, you’ll find a set of instructions, caption cards in photo cards.

Make sure to put the caption and photo cards in separate piles. Before beginning, designate one player to pass out seven caption cards to each player.

The objective of the game is to try and create the funniest meme, which will be voted on by a judge next decide which player has the most Instagram followers.

This person will start as the judge unless they bought their followers, then it doesn’t count for this round.

The judge selects a photo card at random and shows it to everyone. Each player then looks at their seven caption cards and decides which of their cards pairs funniest with the photo card in play.

Then each player passes their selected caption card to the judge face down once the judge has received a caption card from each player, they’ll shuffle them and read each player’s card aloud make sure the photo card is visible for the group to see during this time.

Because it makes it way funnier- the judge then selects the funniest caption card and the player whose card it was wins that round the winner keeps that photo card.

As a trophy after the winner celebrates, everyone draws back up to 7 caption cards and the player on the judges left becomes the new judge for the next round.

Keep playing until your stomach hurts so much from laughing, then the winner will be crowned the player with the most photo cards at the end of the game is the winner and that’s how you play What Do You Meme.