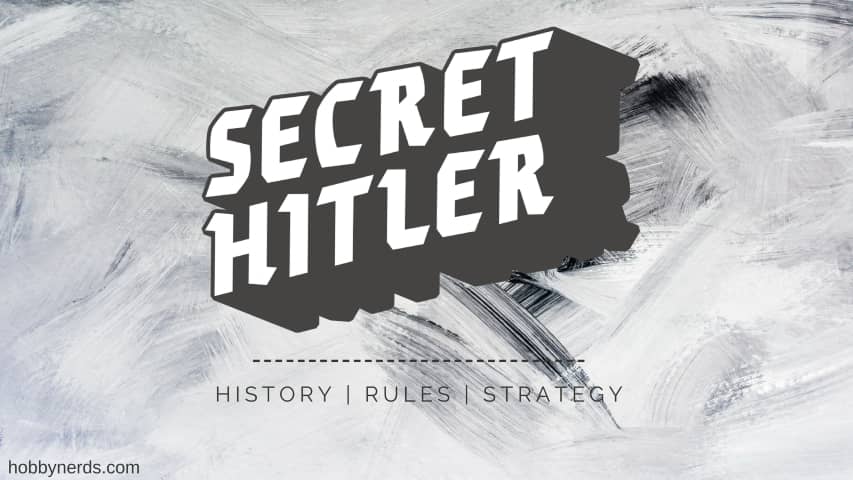 Full of political conspiracy and betrayal, the game involves players being secretly divided into two teams: Fascists and Liberals. Each player is secretly and arbitrarily assigned to be either a Fascist or a Liberal. One player amongst the Fascists is Secret Hitler. Despite being on the Fascists’ team, Hitler doesn’t know who other Fascists are, and has to work to find them out.

However, the Fascists know who Hitler and other Fascists are, and sow distrust and resort to sabotage to advance their agenda, get their leader elected and win the game.

Despite always having a majority, the Liberals don’t know the other players’ roles and need to trust each other to have enough votes to take control of the elections and save the day.

Secret Hitler was created by Mike Boxleiter, Max Temkin, and Tommy Maranges, with Mackenzie Schubert acting as the game’s illustrator.

The Kickstarter campaign that Temkin launched in November 2015 for the game with an aim of raising US$54,450 took just 24 hours to be successfully funded by 200%.

When the campaign came to an end on December 23, 2015, 34,565 contributors had already pledged a whopping US$1,479,046, which made Secret Hitler one of the most thriving tabletop games in the history of Kickstarter.

Interview With The Creator

The GDC YouTube channel published what’s called a ‘design postmortem’, interviewing co-designer Mike Boxleiter. He reviewed the initial design process, “pitfalls and dead ends which were overcome in the iteration process and the final marketing push that helped the game succeed on Kickstarter.”

The game starts with each player being secretly assigned one of the three roles: Fascist, Liberal, or Hitler. Liberals win if they can either enact five liberal policies or assassinate Hitler. To win, the Fascists need to either enact 6 Fascist policies, or elect Hitler as the Chancellor any time after 3 Fascist policies have already been passed.

At first, one player is randomly selected to act as the Presidential candidate. This is followed by the Presidential candidate nominating a candidate for Chancellor. This nomination is often done by discussing with other players to build consensus as it improves the chances of the duo getting elected. Once the Chancellor has been nominated, everyone votes on whether to allow the pair (President and Chancellor) to take office, and enact policies from a random deck.

In case the government enacts a Fascist law, players have to try to decipher if they were merely unlucky or betrayed. A unique trait of Secret Hitler is the government powers that start playing a crucial role as fascism grows. The Fascists will use those powers and lie, as well as generate distrust among players with the aim of creating chaos to further their agenda and get Hitler elected unless they succeed or the Liberals are able to save the day.

If you want to play the game for free, you can print the cards from Secret Hitler Print and Play, cut them to size, and get started right away.

It’s important to know Secret Hitler rules before you start playing the game to understand what you need to do in order to stay away from the Fascists’ traps and lies, and stop them. The basic rules of the game include:

You can visit the Secret Hitler website to get an in-depth understanding of the rules.

When the President and the Chancellor consider which policy tiles they should pick and the ones they should discard, they can’t say anything or make faces to indicate their choice. But after they have enacted the policy, they are free to talk about what they drew, and their lies can often make it difficult to see who’s on which side.

Since Secret Hitler’s Policy deck isn’t evenly stacked (with 11 Fascist and 6 Liberal policies), the President-Chancellor duo could, despite both being Liberals, possibly draw three Fascist policy cards. This makes it crucial for Liberals to trust each other and not give in to the chaos that the Fascists try to trigger with their lies.

For the Liberals, discussing the information available to them and slowing down the play seems to be beneficial. As the Liberals try to figure out who’s on which side of the game, they should tell the truth as lying would jeopardize their team’s chances.

For the Fascists, lying seems to be the most appropriate strategy when talking about what they drew. This way, they can create confusion about what’s left in the deck, thus shifting the suspicion on other players. They should even lie and claim to be on the Liberals’ team as outing themselves to the majority by claiming to be a Fascist would do them no good.

This included the game’s standard edition, which was delivered in a high-quality quality wooden case with brass hardware that was originally created for the Kickstarter campaign.

At present, it’s no longer available. However, you can get the game’s standard edition which comes with foil inlays on the boards together with wooden placards for the President and the Chancellor.