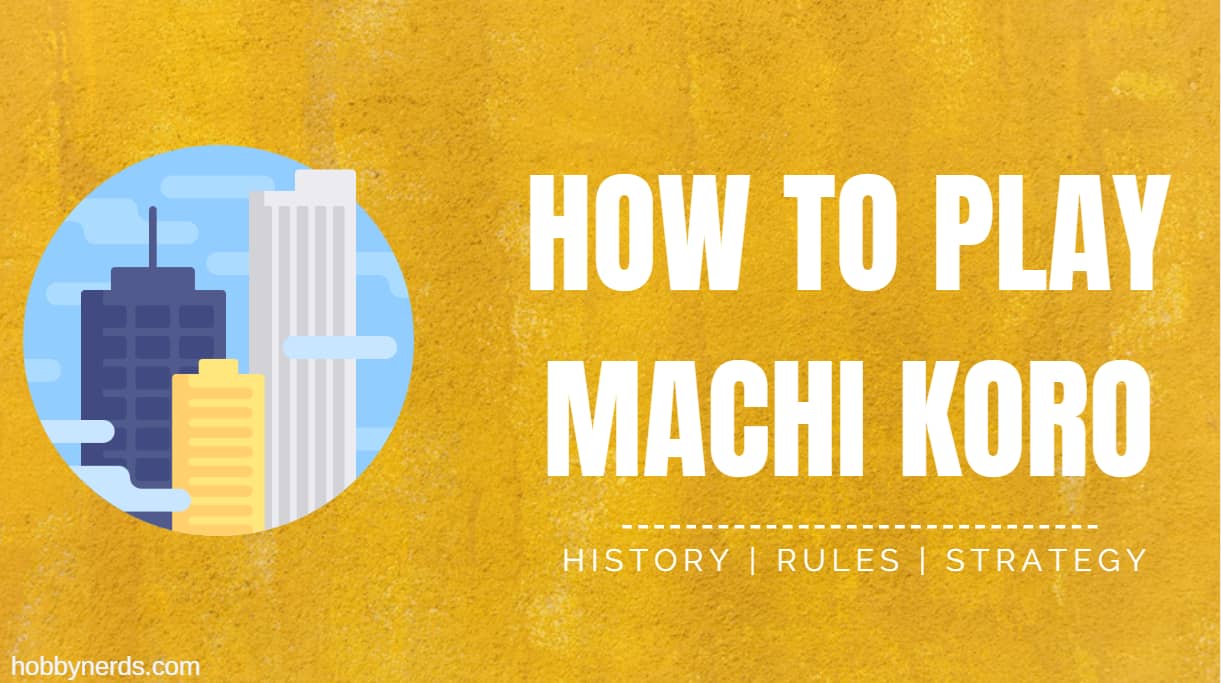 Machi Koro is a card and dice, fast-paced, city-building game from Japan that has been making quite a big splash among game enthusiasts.

In Machi Koro, participants roll dice to earn coins that help them develop their city, with the aim of being the first player to complete a range of in-game landmarks and win the game.

Machi Koro is an excellent family-strategy game to play with children old enough to understand a little bit of math (it’s all about adding and subtracting the numbers, other than the probability aspect).

Designed by Masao Suganuma, Machi Koro was published by the Japanese games company Grounding Inc. in 2012.

This light, quick and approachable game is considered as one of the hottest additions in the succession of miniaturized games. Being crowned the winner of the 2015 Geekie Award for Best Tabletop Game, it has been published in eleven languages and has received two prominent expansions. The “Harbor Expansion” was released in 2012, expanding the base number of landmarks.

In 2015, Machi Koro “Millionaire’s Row” was released, adding additional high-tech industries and luxury-oriented establishments. In 2016, the “Machi Koro Bright Lights, Big City” was released, featuring a blend of cards from the base game and both the expansions.

Participants find themselves in the role of a small-town mayor having big aspirations. Armed with only two establishments namely a bakery and a wheat field, they’ll try to develop a thriving metropolis and become the first one to finish four major landmarks namely a shopping mall, train station, radio tower, an amusement park.

To attain this, you’ll have to develop your town by procuring new buildings, each of which offers an opportunity to increase cash for your emerging city.

You’ll roll dice, on your turn, to identify which, if any, of your buildings bring in revenue.

For instance, convenience stores pay three coins whenever you throw a four. A bakery pays a single coin when you throw a two or three. You can get repeated payouts through multiple copies of the same building. So, you can receive a potentially game-changing nine coins through three convenience stores, each time their number comes up.

Other buildings present new complications as well as opportunities to consider. Cattle ranches and wheat fields don’t generate huge amounts, but they pay out on other participants’ turns as well as yours.

Restaurants and cafés, if they are triggered on your own turn, pay nothing but if other players activate them, they’ll need to pay you for the privilege of dining in the establishments you own.

Forests and mines are not all that useful immediately, but they allow you to develop lucrative factories in the game later. All of these mean there are a number of viable options to develop a successful city.

Your deck, which is your city under the theme of Machi Koro, is always completely in play. It means players, even at someone else’s turn, might be required to pay another player or get a payout. The key decision for participants is how much to invest in the higher payouts rather than spreading out card procurements to cover more likely dice rolls.

Players look at the resulting value of pips on the dice rolled and compare it with the number at the top of establishments owned by them. For instance, starting bakery of a player goes to work if a two or three is rolled. Each bakery the current player has in his/her city will earn him/her one coin.

You can understand all these aspects better by watching the “Watch It Played” video at IDW games website, which published the U.S version of Machi Koro together with Pandasaurus Games.

Establishments in Machi Koro come in four different types. There are different ways through which every type earns income.

Although Machi Koro rules are easy and short, players still need some setups to play the game.

To attain in-depth knowledge of Machi Koro rules, you can have a look at this rulebook.

Or scroll through the rulebook here:

Its gameplay is the same as that of Machi Koro. The dice is still getting rolled, income is still getting collected and players are still running to develop landmarks – but there are hidden changes that unlock deviations as things proceed. The all-new 10-game campaign consists of hidden objectives coupled with an astonishing narrative arc set.

In Machi Koro Fussball, players get to participate in the historic process of construction projects associated with the mega-sporting event – The World Cup. You can participate as an investor who is developing multiple building projects. You can watch what others develop, take risks, and aim for profit from your very own football world.

How To Get Started

In this review, the vlogger demonstrates how to play the two to four player game, Machi Koro by Pegasus and IDW games.

He explains that each player takes on the role of a mayor, but your city is just a wheat field and a bakery, so not very significant you’re going to have to gather and maybe steal some resources to build up your city the quickest and win.

So join him at the table and let’s learn how to play to set up. Each player collects the for starting landmarks: the train station shopping, mall, amusement park and radio tower before the landmarks are built.

Full Gameplay Guide
They have a gray sign and once completed they’re flipped over to show their colored sign to begin.

The game with these four landmarks, with a gray side, face up in front of you and return in the extras to the game box. The rest of the cards are establishments, there are starting regular and major ones.

The starting establishments are easy to identify because they have a different colored back compared to the rest of the cards.

So to begin players will take a wheat field and bakery from the starting establishments returning any leftovers to the box.

The rest of the establishments come in 15 different types and there are several copies of each to organize them into face-up stacks in order by the numbers shown here at the top. The game comes with several coins, and these come in denominations of 1, 5 and 10.

Each player starts with 3 coins and the rest are kept here in a bank along with the two dice.

Finally, you choose a starting player, perhaps by rolling the dice and then you’re ready to begin in machi.

Players would use coins to buy additional buildings that they will place in front of themselves. These buildings have abilities that are activated when the dice are rolled, usually giving you more coins from the bank or from other players earn enough coins.

You can start to complete these landmarks. Complete all four landmarks first and you win. Players take turns in clockwise order around the table and on your turn, you complete three phases, starting with the first phase roll dice. When the game begins players roll only one died on their turn.

The next phase is to earn income. You check to see if you’ll be able to collect any coins by looking at the values on the top of each of your establishments if they match the dive value their effects trigger. For example, the vlogger edroll the two and that falls within the range of his bakery, and it says that he gets one coin from the bank when rolled on my turn.

The establishments come in four different colors to remind you when you collect coins for them.

For example, if another player roll the three then my cafe would activate and I would get one coin from that player. Purple establishments give you coins from other players as well, but only on your turn.

So if I roll the six, I would get two coins from all players, but only on my turn, if you ever Aucoin x’ to a player, but you don’t have enough to pay them fully, you pay what you can and then you ignore the rest and that Player is not compensated for their lost income, also, if more than one player is owed money. At the same time, for example, let’s say that we have three players: one is seated here. One is seated here and I owe them both two coins, but I only have three: you always pay back in counterclockwise order, so I would pay two of my coins to this player and then one to that player once you’ve earned income. You now enter the construction phase, where you can use your collected coin to buy a single new establishment.

The cost for each establishment is shown here in the bottom left hand corner. Let’s say I decided to buy a cafe. This costs two coins.

I place it here and pay two coins to the bank. Now it can trigger when dice are rolled on future turns your city can have multiple copies of the same buildings, and it’s recommended that you stack them like this.

However, when it comes to the major establishments these purple cards, a player can only have at most one of each type each copy of a building you roll can be triggered when you roll a die. For example, if I roll the two now instead of collecting just one coin from the bank, I get one for each bakery that I own.

So I would take two when resolving the order that buildings trigger in always resolve red buildings. First, then, all green and blue and finally any purple ones. Instead of constructing an establishment, a player may instead complete a landmark by paying its cost and then flipping it over. These can be completed in any order and once flipped over, they provide you with a special power.

These powers are not active when the landmark is gray side up, but they’re still written there just to remind you of what they can do. For example, now that we’ve completed the train-station, we can roll one or two dice on our turn. But just note, if you choose to roll two dice, you always add the numbers together into a single value. Once you’ve completed the shopping mall, each of your establishments that have this and this symbol will earn an additional one coin.

When the amusement park is completed, if you ever roll doubles, you take another turn immediately after the one you’re currently taking and if you’ve completed the radio tower once every turn, you can choose to re-roll your dice.

Now, if you have chosen to roll two dice, you can’t just reroll one of them: you’ll need to re-roll both of them as soon as a player has completed their fourth landmark.

They immediately win the game and, as a reminder, you do not have to complete them. In order, so you could save up and complete the radio tower first, if you really wanted to and that’s how you play machi Koro now, here’s something to consider you may want to get a variety of different kinds of establishments and that way, no matter what is Rolled you’re more likely to get some coins from the bank.

On the other hand, you may try to stack up on some of the specific establishments and that way, if you get those certain number, while your payout could be quite large and there’s also some other establishments that combo with other ones. For example, the fruit and vegetable stand will give you more coins based on the number of wheat fields that you have.

But if you have any questions at all about anything that you saw in this, video, don’t hesitate to put them in the comments below and I’ll gladly answer them as soon as I get a chance and do consider subscribing to our channel, because in follow-up episodes we’re Going to do a full playthrough of Machi Koro and you can really see how the game works and even participate in the gameplay.