Joking Hazard is an 18+ party card game where players compete to develop funny and awful comics about friendship, sex, violence and everything in between.

All the panel cards are combined to develop millions of awful situations, and at times, even some nice ones.

What makes this game stand out from many already on the market is that unlike CAH or Apples to Apples that have subject and answer cards, cards in Joking Hazard are all panels of a comic, which can be played in any order.

Developed by the creators of Cyanide & Happiness web-comic, Joking Hazard game has entertained millions of party game lovers since its inception. 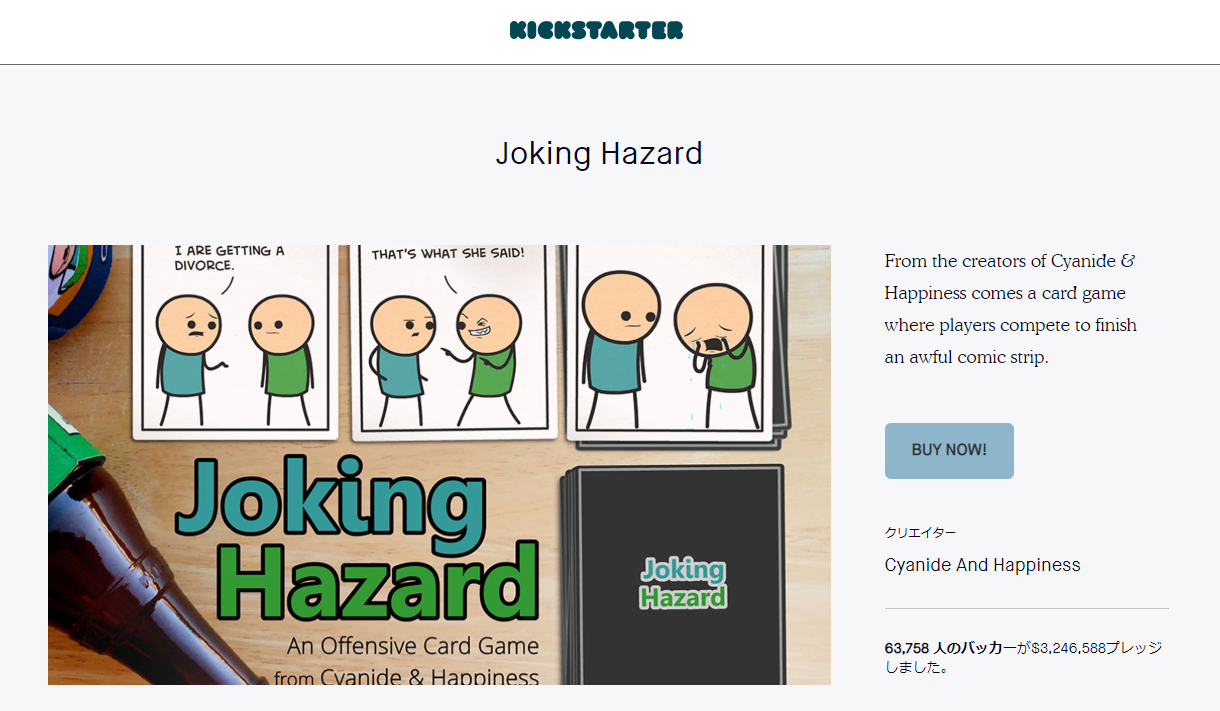 On February 9, 2016, a Kickstarter project was started for Joking Hazard and the funding finished on March 10, 2016 with more than $3.2 million being raised successfully. The game was brought to life by 63758 people on Kickstarter.

In the Joking Hazard game box, you get 350 comic panel cards together with 10 add-your-own cards. These 10 cards are useful if you have a good idea, or wish to bring your stupid friend Greg into the game and make fun of him.

First, the game starts with you picking a player from the group as the judge, who flips the top card of the pile and places it on the table.

Then, the judge takes one of the cards from his/her hand and selects to play it either as the comic’s first or second panel (either in front or behind the flipped card). Lastly, all the other participants of Joking Hazard submit their preferences for the last panel.

Then the judge mixes them up, discloses them and selects his/her favorite, drawing an end to the comic and giving points to the winner of the game.

While the fundamental gameplay of Joking Hazard encourages absolute fun and is highly entertaining, it is the unending story mode that actually appeals to the participants.

For scorekeeping purposes, the winning card(s) are retained by the owner, face up. And the person, left to the current judge, becomes the next judge.

You can visit the official website of Joking Hazard to get a detailed understanding of the gameplay.

While the Joking Hazard rules are pretty simple, you need to be aware of them to enjoy it to the optimum.

Print Your Own Deck 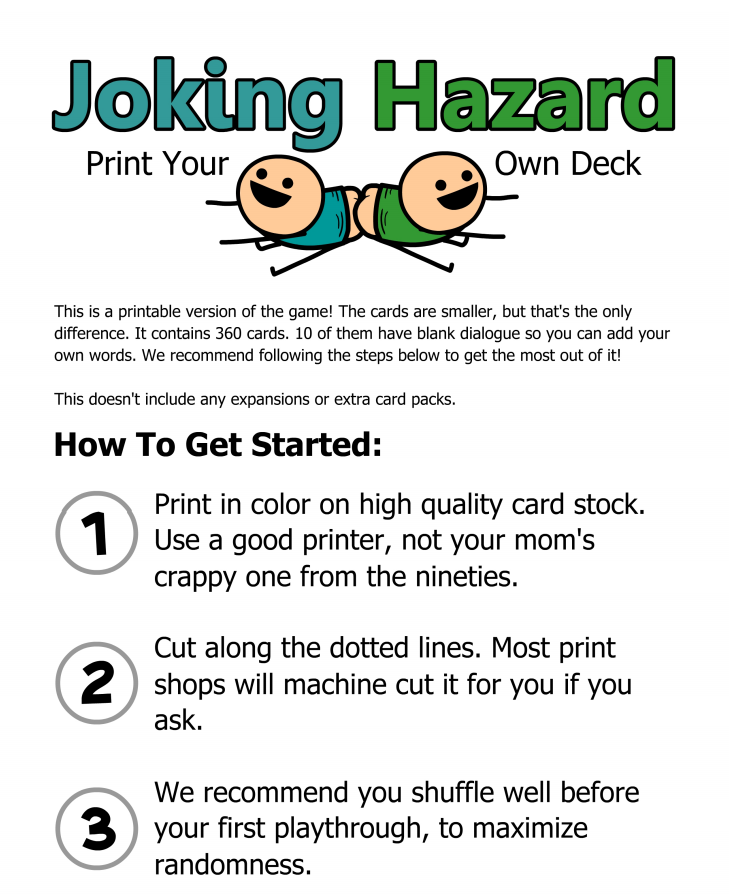 All you need to do is simply mix them into the original deck. These comic panels are weirder and dirtier than ever and are made to take the game to new heights.

The Joking Hazard deck enhancement #2 also brings in 100 brand new cards to make the game raunchier, dirtier, and more offensive than ever before. As this is an expansion pack, you will need the actual Joking Hazard deck.

Joking Hazard Blast From The Past

If you feel that the main Joking Hazard game box does not consist of sufficient cards for you, you can get the Blast from the Past booster pack.

This exclusive pack will get you an additional 50 history-related Joking Hazard cards to take you back to the terrible times.

Check out the announcement video from ExplosmEntertainment:

Joking Hazard Enlarged Box, which is another expansion pack, brings you 10 brand new cards to install into the mix.

This also includes 10 add-your-own-words cards to write your very own awful comic panels. Like the earlier expansions, you will also need the original Joking Hazard game to begin playing.

When a card in Joking Hazard comes with a red border, you can only play it as a third panel. If a red card is played by the deck, a second panel is not played by the judge.

Instead, the two-panel setup is played by every other participant, and the judge picks his/her favorite. Whoever wins receives two points rather than one.

In this mode, all the red cards are removed from the deck. Every player takes 10 cards. Each participant adds a panel, thus developing one super long comic while going clockwise.

If a panel does not make sense, players can reject it through a majority vote.

You can trade any card from your hand for two extra cards, and skip your turn if you can’t play a card that makes sense. The first player, who runs out of cards, becomes the winner.

Here, players keep on playing until the deck runs out, rather than competing for 3 points to win the game. At the time the deck runs out, whoever holds the maximum points becomes the winner. If it is a tie, the player with minimum score becomes the judge and plays two panels. And the punchline is played by everyone who is involved in the tie.

Joking Hazard vs. Cards Against Humanity

Both are adult games and comprise of many dark jokes and inappropriate things that may not be accepted by some people.

Joking Hazard is played by making or completing a comic using the cards, while Cards Against Humanity is played by using words and phrases to form interesting statement.

While both of them are equally funny and equally awful, people who like the Cyanide & Happiness comic would like the Joking Hazard game.