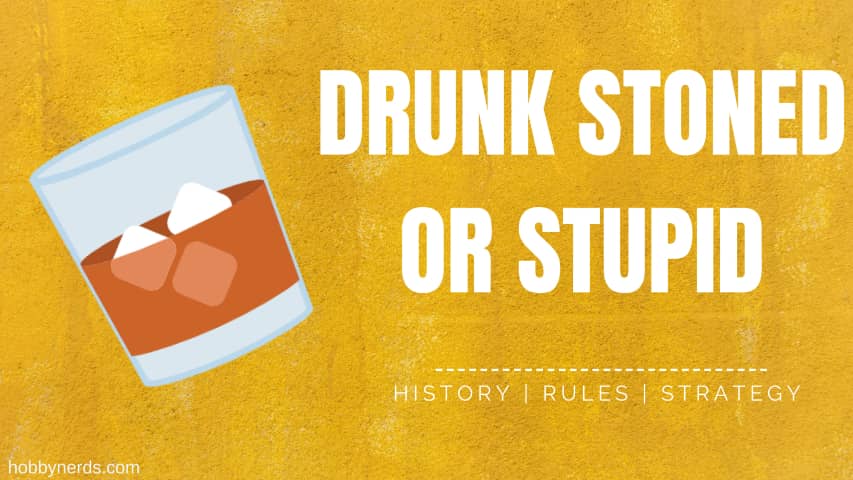 An intoxicating party game, Drunk Stoned or Stupid is perfect for anyone willing and able to call out friends for the stupid things they do. You can also play with your family if you are feeling crazy.

In this game you, together with your friends, call each other out for things you do. While Drunk Stoned or Stupid offers a feel of “Cards Against Humanity”, it becomes more personal when you call the friends out in a humorous way.

The accusations can be created on anything from past stories, personality traits or something else the judge requires to rule for the point. Debating is the key mechanics of Drunk Stoned or Stupid, and as long as you are able to argue your point, the game remains fair.

If you read the product description,

Drunk Stoned or Stupid is a party game where in each round a card is drawn and the group decides who in the group should be tagged with the card.

First a player declares themselves the judge and reads a card aloud. Each person then says who in the group should be tagged with this card and why.Accusations can be based off of personality traits, past stories, or really anything at all.

As long as you can argue your point, it’s fair game. The judge considers all accusations and makes the final ruling on who should be tagged with the card.

This person keeps the card along with the shame. The judge rotates to the next person in the group. First person with 7 cards loses. There are no winners in this game… only losers.

Created by Trevor and Noah Mayer, twenty-something brothers from California, together with their father Andy Mayer, Drunk Stoned or Stupid has gained amazing popularity amongst 18+ party game lovers. 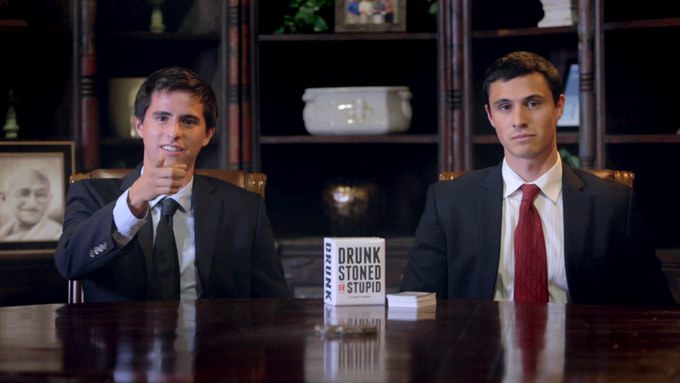 The game rose to fame after a successful Kickstarter campaign that helped the co-creators raise more than $10,000 to launch it.

The goal of this game is  “are you drunk, stoned or stupid?” Drunk Stoned or Stupid players try to be the first to receive negative 7 points in order to be the first loser.

Making up humorous answers to the topics or questions presented helps you lose the game.

To start the game, all you have to do is shuffle the deck of questions and you are good to go.

The group selects a starting player to act as the judge (the judge changes with every round). Next, they draw the card and go through it loud. Some sample questions may include:

Which one of your friends is most likely to…

“Pay you back later”

Once the question has been asked, the player to the left of the judge will propose a person’s name from the group who he/she thinks fits that question the best, and the accused person would try to defend himself/herself.

While everybody in the group gets a chance to offer who, according to them, is guilty of that trait, the judge takes the final call.

The guilty party is given the card, which means he/she loses a point, and the player, who receives 7 negative points, becomes the looser automatically.

While the name Drunk Stoned or Stupid has nothing to do with how the game is played, there are chances you may have been drunk, stoned or just acting stupid if you get tagged with a majority of the cards. No one wins in this game, as a player can only lose. To thoroughly learn how to play Drunk Stoned or Stupid, you can watch this video.

Drunk Stoned or Stupid rules are quite simple and the game is played with only a deck of 250 prompt cards. Basic rules include:

You can visit Drunk Stoned or Stupid website to get a deeper understanding of the rules.

While the core Drunk Stoned or Stupid game consists of cards submitted or wanted by friends of the Mayers, the first official expansion pack comes with a significant number of cards from the audience of the game.

The expansion pack features 125 new cards coupled with classic rules that ensure more intense and incomparable pleasure for the senses.

Drunk Stoned or Stupid vs. Cards Against Humanity

While everyone needs to be in the proper mood for this drinking card game, with the ideal intoxication level, it can become extremely hilarious.

When you are stuck indoors and just want to have some fun with friends, this game is the ideal bet.

Though the game can be actually called a version of picking on someone or name calling, it’s all done in a fun way which is its real USP. Several drinking game reviews have rated Drunk Stoned or Stupid favorably, saying it gives the players a light-hearted way of creating lots of laughs.

However, a few warn the game’s hosts to make sure that their guests are open-minded enough to play it without being offended. Since this game involves pointing a finger at the players by turns, not having people with the right mindset may trigger frayed nerves and what begins as a fun game may soon turn into heated arguments or even worse.

Drinking card games like Drunk Stoned or Stupid are best enjoyed when you play them with friends or people you know. Despite being a fun game, Drunk Stoned or Stupid does have a nasty sting. And unless you know the players well, the fun of pointing a finger and seeing the accused defending his/her side won’t be half the fun it actually should be.

“Which of your friends is most likely to go straight to hell?”

“Which of your friends is most likely to have questionable hygiene?”

Perhaps you now understand how heavily this game relies on knowing the people you play with. Though this game offers a rule variant which allows you to play with strangers, the real fun unfolds when you play it with friends or people you know well.

Lastly, a word of caution: whether you are playing with friends or strangers, if you think the players may take some of the cards “too personally,” make sure to take them out before you start playing the game.